The Latest from P22

Economy of Typeface by Josef Albers 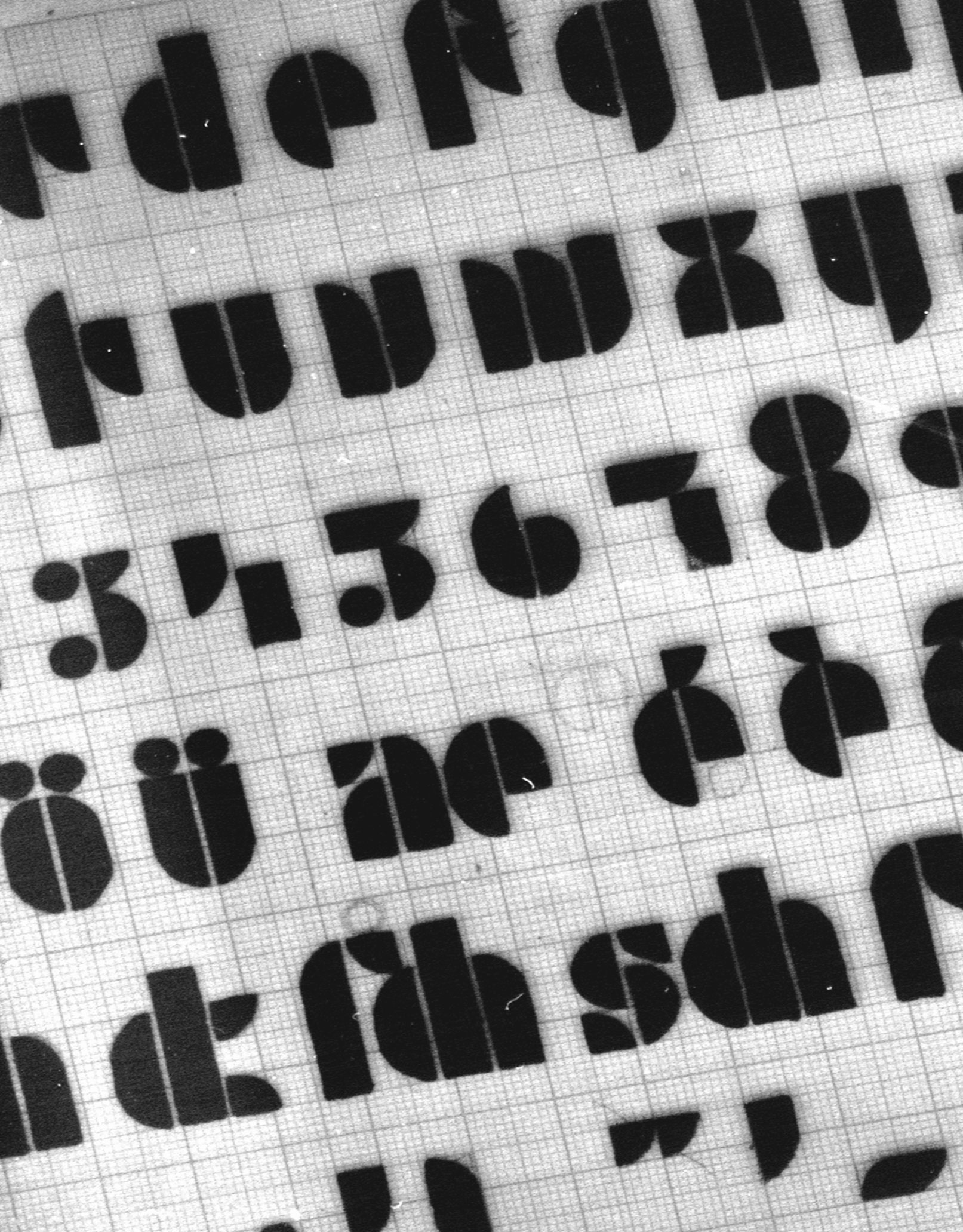 The following text features condensed translations of essays by Josef Albers regarding his rationale for the development of his Schabloneneschrift alphabets circa 1926. The Translations were executed by David Blocher for the Josef and Anni Albers Foundation. All Rights Reserved.

Flowing type--that is, written elements lined up in a regular fashion-- corresponds to flowing speech, to the uniformly stressed linguistic representation. Epic language requires its purest application. We don't speak like this at all any more. Life today doesn't take place at a steady pace; we can no longer be classical. Time is money: events are determined by economics. We live at a fast pace and move accordingly. We use shorthand and the telegram and code. They are not the exception, but rather the rule. Our speech is condensed, and using only expression and gestures as language can no longer be forbidden, as it was with the Greeks. Because we must increasingly think in economic terms, we will become more and more Americanized. A new world is coming. The new libraries in America have few books, but very many magazines. We're moving in the same direction. We read newspapers more frequently than books. The book dealers' business isn't very good; who wants to have a multi-volume work today, and where are the young people who bury themselves in books all day long? There are already overview-magazines without articles. Keyword excerpts which replace many essays of many periodicals. And of these, we prefer the ones with pictures: the picture informs better and more quickly; the page of pictures can be comprehended in seconds. All typefaces are experiencing strong competition from photography, cinema and radio. We have to read quickly, just as our speech is condensed . Thus, flowing typefaces can no longer dominate. The accentuated, emphasized, underlined, abbreviated, illustrated font will predominate. As will the notice, the declaration, the appeal, the program, the abbreviated word, the keyword in speech. We must be able to understand the poster when riding by in a street car or in an automobile. Thus, we are moving away from the book. And in doing so, from the typography of the book. Most printed material is no longer in the form of books. The language of daily contact is no longer that of books, and the concept of written language has almost exhausted itself.... Economy and therefore technology and transportation prevail, and thus rigid standardization is required. Everything demands concision. The stencil typeface, which is published here for the first time, is an attempt to shape in a standardized way the typeface in its relationship to its individual elements and in various typefaces' relationship to one another. It does not claim to be definitive and its intent is to solicit interested parties for their critique and collaboration.

Regarding "Stencil Typeface"
It is intended to be a typeface for advertisements and posters, especially for larger sizes, which is clearly legible at some distance. The legibility of the most commonly used typefaces decreases with distance, probably the least with "Egyptienne", which was first developed as a military typeface under Napoleon I. The "stencil typeface" increases legibility at a distance. It is made up exclusively of basic geometric shapes, as are "Egyptienne" and "Grotesk" in part, and specifically of the following three: the square, the triangle (half of the square cut diagonally), and the quarter circle whose radius corresponds to the side of the square. The elements of the letters combined from these shapes stand unconnected next to each other: the hairstrokes are replaced by relationships of size and movement of the purely flat elements. The size ratio is 1:3 throughout. The height of the small main stem [Balken] equals three times the width. The distance between the letters is 1/3 the width of the bar. The sides of the triangle (square divided diagonally in 2) are 2/3 of the total of the square's sides. The minuscules measure 2/3 of the ascender. The distance between the characters is uniform throughout, so there is no compensation or adapting as is otherwise customary with round shapes. The furniture overhang is, on both sides, equal to the inner distance. In doing so, and by composing it of the same elements, a standardization of the typeface proportions results. The type and furniture can thus be cut precisely with machines. The line does not have any tracking added to it, it is no longer justified. The distances between words and letters, giving the impression of variously sized gaps, are no longer the exception, but rather are dispersed all over the writing area. They [the spaces] will enliven it, just as large capital letters did when placed in the middle of a word during the Baroque era... The standardization of the constitutive elements of the letters allows reducing the letter to its basic elements when there is a modest need for especially large typefaces. The extent of the typesetting material is significantly reduced and at the same time we obtain parts for lines and geometric shapes, arches, circles, etc.; in short, elements for a wide variety of material that may be used for emphasis.

This Translation appears courtesy of the Josef and Anni Albers Foundation ©1997. All rights reserved. No reproduction permitted without the written consent of the Albers foundation. Complete translation with Translators notes can be found within the Albers font package.

Economy of typeface, Author name is mention here. Come when you think you are doing work bestessays review pages where you must start to do work. I have some interesting news to show you more for economy work which are really mean here.